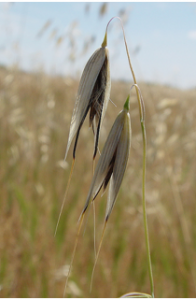 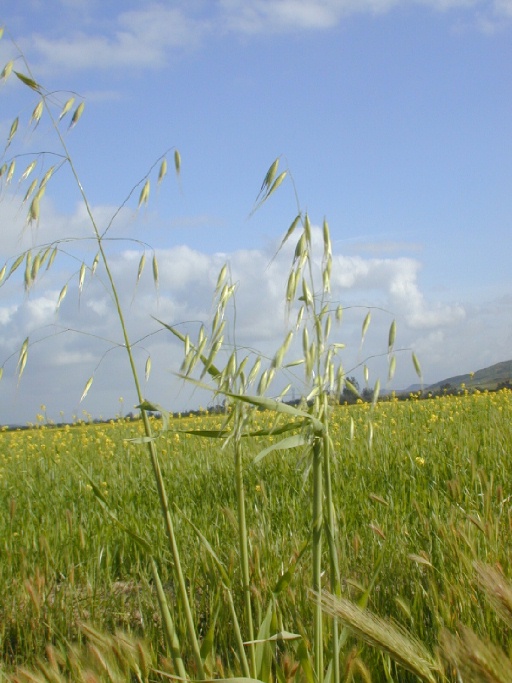 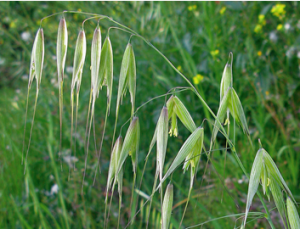 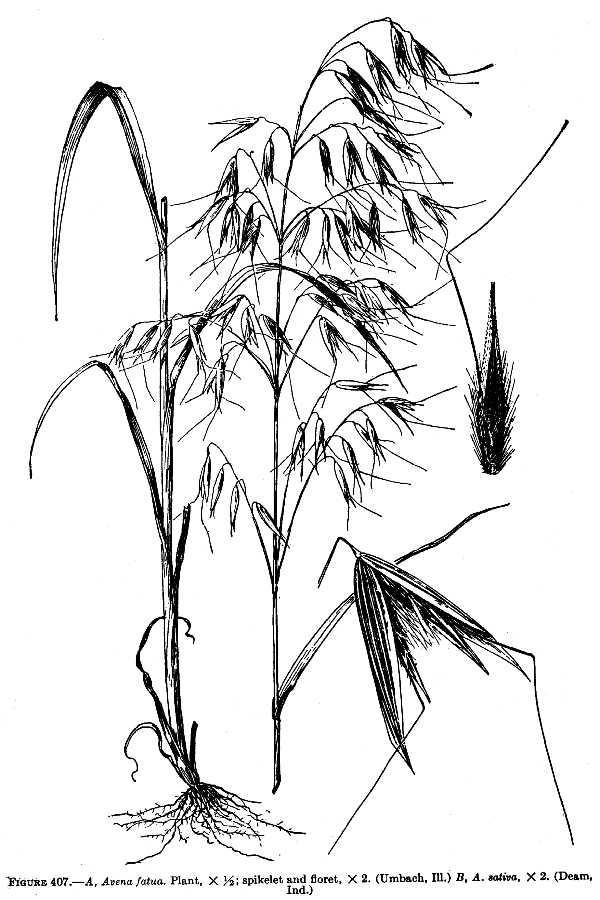 Flowers/Fruits:
Flowers have 3 anthers.
Ovary pubescent all over
In California, it flowers from March to June, while in Australia it flowers July-October
Fruit – caryopsis with adherent pericarp; hairy all over.
Leaves:
Leaves alternate
Ligules 1-4 mm long, lacerate, auricles absent; sheaths can be smooth or softly hairy
Blades linear, flat, 1-5 mm wide
Inflorescence an open terminal panicle, 3-10 cm long.
Spikelets 20-30 mm long, slightly compressed, composed of 3-8 florets, the glumes linear to narrowly lanceolate, the lower one 5-10 mm long, 1-nerved, the upper one 8-13 mm long, 3-nerved; lemmas 12-17 mm long, lanceolate, 3-5-nerved, the back keeled to rounded, the apex with two lateral teeth 4-5 mm long, the back of the lemma with a bent awn 12-20 mm long.

Habitat & Basic Biology (life history, dispersal abilities):
A. barbata is native to Asia and Mediterranean Europe where it is located in grass meadows and within agricultural landscapes. It is an early pioneer grass species to freshly disturbed ground, especially when not shaded. It is known in its introduced range to be a crop edge, road verge or agricultural weed species; however it is also well adapted to urban amenity spaces. A. barbata is an annual graminoid and reproduces by seeds. It is self-pollinating, producing prolific seed counts which can overun other native species. The seeds are caryopsis oblong, about 8 mm long, ventrally compressed, longitudinally grooved, hairy and yellow-black in colour. The seed of A. barbata can usually remain viable for 6 months if not buried within soil, up to 3 years when buried within soil. Buried seed often remains dormant until exposed by cultivation or other disturbance.

Functional traits (photosynthetic rates, phenology, etc.):
As with most grass species A. barbata can tolerate a wide range of soil conditions but it thrives in poorer draining soils. This is a winter oat species. Preferred temperature range is: Warm average temp. > 10°C, Cold average temp. > 0°C, wet all year.

Distribution (geographic range):
Native to Asia and Mediterranean Europe, it has been widely introduced, probably since the eighteenth century, to North America, Australia and other parts of Europe.

Control Methods:
Physical/Mechanical Control:
Mowing is an option for the suppression of A. barbata, however this should be timed prior to the production of seeds, otherwise it aids the dispersal of seeds into the soil seed bank. Intense ‘crash’ grazing by livestock could also be an option for controlling A. barbata. However, over-grazing could also cause the disturbance required to germinate the dominant A. barbata seed from the soil seed bank.

Biological Control:
P. coronata as a biocontrol agent for A. barbata on San Clemente Island.

Chemical Control:
fall and spring applications of triallate [S-(2,3,3-trichloroallyl)diisopropylthiocarbamate] were effective at controlling A. barbata. The authors concluded that fall applied triallate granules were more effective than either liquid or spring applications of either liquid or granules. When soil improvement is also incorporated into control methods the effectiveness of the triallate application was increased. Alternatively in Australia it has been reported that spraying at the 3-5 leaf stage with Fusilade Forte and wetting agent is effective. Especially when repeated over a number of years. This prevents seed production and reduces biomass rather than eradication.

Evolution (of traits in novel range):
Highly adaptable to new environments, which favor genetic recombination and result in strong hybrids

Performance of invader in CA (interactions with species native to S. CA):
Avena barbata (slender oat) is a species of wild oat that is native to Asia and Mediterranean Europe. It was widely introduced to North America and other European countries both intentionally, as a fodder crop, and unintentionally in contaminated seed mixtures. A. barbata has spread widely in North America where it has been reported to displace native grass species. It is recorded as a noxious weed in the USA. In Australia, it outcompetes native grasses and forms a fibrous root system. It can also alter the fire regime of an area.

A. barbata has been found to out-compete native grass and woody species by exhausting the surface soil-water before native species have had a chance to establish. It has also been found to alter the fire regime of areas of Australia. Instead of woody species dominating areas, grass species are dominant and much easier to flash fire.