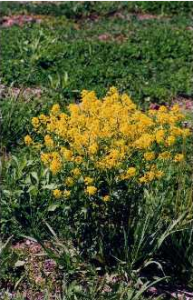 Morphological Description:
Flowers/Fruits:
Flowers are small, yellow, and have four petals. Seeds are small, with colors ranging from dark brown to black.
Leaves:
Leaves are broad area at the tip and become smaller at the base. Has a fibrous root system not exceeding 1m in depth.
Leaves have small hairs

Habitat & Basic Biology (life history, dispersal abilities):
B. nigra is an annual weedy grass that regenerates during the rainy season
Due to the proximity of B. nigra to rivers, seeds are often dispersed through water, resulting in gene flow between multiple populations.

Functional traits (photosynthetic rates, phenology, etc.):
B. nigra has glucosinolates which repel herbivore activity
Glucosinolates are compounds containing sulfur and nitrogen
B. nigra has a residue of Allyl-isoisothio-cyanate (ITC) which reduces the germination and growth of various grass species
C3 producer

Found near rivers and coastal regions
Originally found in France and Germany
Found at low elevations in California
Common around the coastal plain and foothills in Santa Ynez Mts. south of Santa Barbara

Control Methods:
Hand weeding and and shallow tillage
Exposure to enhanced levels of UV-B radiation can reduce B. nigra fitness, due to reduced visitation by pollinators

Evolution (of traits in novel range):
Environmental conditions determine differences among populations
Differences are not linearly related to geographic distance
Local herbivores are more likely to adapt to the presence B. nigra than vice versa
B. nigra responds to root consumption by changing its profile of chemical compounds
B. nigra can engage in the killing of Pieris Rapae eggs (P. Rapae is a butterfly which lays eggs on B. nigra). This may be a direct response to herbivory or simply a random occurrence.
Can maintain physiological function when going from low-light to high-light conditions.

Performance of invader in CA (interactions with species native to S. CA):
B. nigra affects other species through competition and allelopathy (using chemical compounds to impact other plants)
B. nigra diminishes Nassella Pulchra growth by changing the behavior of native consumers

List of References:
Bell, D.T. and C.H. Miller, 1973, American Midland Naturalist: Researchers investigated the invasive mechanisms of B. nigra and found that water soluble phytotoxins inhibit native grassland species and allow for invasion by B nigra.

Connor, J.K. and L.A. Zangori, 1997, Oecologia: Researchers attempted to better understand the UV-B effects on pollination success/fitness in B. nigra and B. rapa, and after a series of experimental plantings found that B. nigra fitness declined at high levels of UV-B while B. rapa fitness levels remained unchanged.

DeVay, J.E. and A.M. Shapiro, 1987, Oecologia: Researchers investigated the process in which B. nigra kill the eggs of Pieris rapae and P. napi by desiccating the egg. This is seen to be a hypersensitivity reaction, and the eggs may be rescued by keeping them within a saturated atmosphere.

Funk, J.L. and V.A. Zachary, 2010, Biological Invasions: Researchers studied the effects of water stress and high-light stress on native and nonnative plant species; in general no difference was noticed in the performance of native versus nonnative species. B. nigra were resistant to photoinhibition.

Oduor, A.M.O., et. al, 2011, New Phytologist: Researchers studied the post-introduction evolution of a trade off between resistance to and tolerance of herbivory. B. nigra were planted and compared for growth and defense traits and researchers discovered that invasive population in comparison to native population had higher resistance and lower tolerance of herbivore damage.

Tawaha, A.M. and M.A. Turk, 2003, Journal of Agronomy and Crop Science: Researchers conducted greenhouse and laboratory experiments to determine effects of B. nigra populations on wild barley.  Scientists discovered that the growth of wild barley was significantly reduced when grown in an area previously cropped to B. nigra.