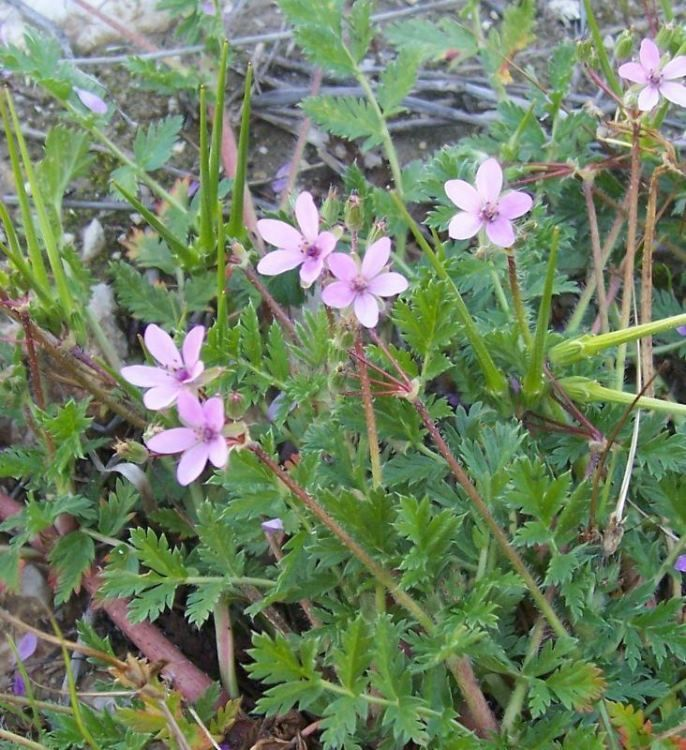 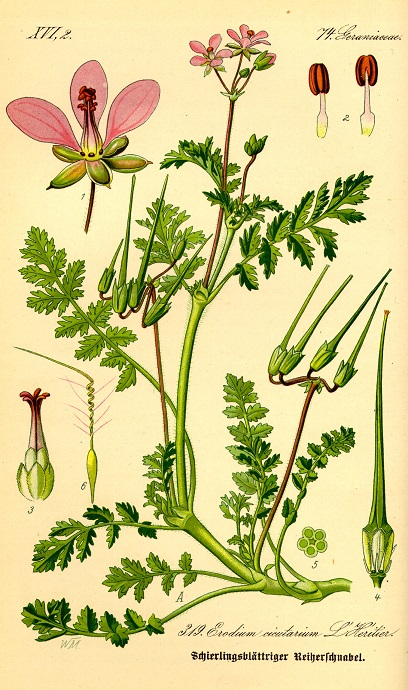 Morphological Description:
Flowers/Fruits:
Flowers are produced close to the ground
The flowers have 5 petals each and have a purplish-pink color
Each flower produces approximately 5 long lobed fruits, each with an awn-like tail that dries and splits as it matures.
Leaves:
Part of the Geranium family
Leaves are finely divided and have a red tint
Barbed carpels and corkscrew-like style

Habitat & Basic Biology (life history, dispersal abilities):
Annual forb of summer or winter
Germinates well in temperatures of 5 to 20 degrees Celsius
Quick growth through the vegetative phase, early flowering, self compatibility, high seed output, ability to germinate on bare soils
Has sharp pointed, barbed carpel is equipped with a persistent, corkscrew-like style that attaches to fur and feathers and once deposited can plant itself by hygroscopically drilling into the soil
Is capable of self-planting seeds
Seeds are often established in large crevices

Functional traits (photosynthetic rates, phenology, etc.)
The ideal mean daily temperature for growth is predicted to be in the range of 17 to 20°C. 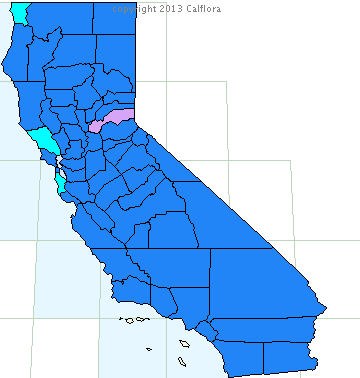 Native range: Africa, Asia, and Europe–Spain
Transported via ship or through Arizona or New Mexico or up from Baja California to southern california
Thrives along paths and roads and is well adapted to cling to the feet and legs of animals
Vectors: grazing mammals, lifestock, seed eating migratory birds from baja to Southern california

Evolution (of traits in novel range):
An annual that co-evolved with domesticated livestock, outcompetes perennial species in the absence of livestock

Performance of invader in CA (interactions with species native to S. CA)
Natives to coastal sands and grasslands, grazing mammals the disturbance factor that made is possible to invade grasslands
E. cicutarium has a negative correlation with native species (when E. cicutarium is abundant, native species are less common)

Plant height is substantially smaller when faced with water stress

Natural enemies
Livestock, even though mammals aid in the spread (by diminishing natural vegetation), they also help keep the populations down

List of References:
Blackshaw, R., and Harker. 1998. Erodium cicutarium density and duration of interference effects on yield of wheat, oilseed rape, pea and dry bean. Weed Research 38(1): 55.
Scientific paper regarding impacts and management of species as well as distribution information in Canada.

Stamp, Nancy E. “Self Burial Behaviour of Erodium Cicutarium Seeds.”JSTOR. University of California, Davis, 1984. Web. 10 June 2014.
Stamp and colleagues investigated the self-burying behaviour of E. cicutarium and found that Burial depended on the location of crevices by the seeds

Scott, Phillip. “Pre-mission Invasion of Erodium Cicutarium in California.”ResearchGate. University of California, Berkeley, Feb. 2003. Web. 9 June 2014.
Scott and colleagues present pollen evidence which indicates that Erodium cicutarium, a Mediterranean annual, was well established in the Santa Barbara region several years before the founding of the first California mission at San Diego in 1769.